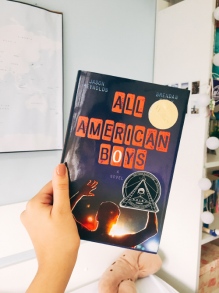 That’s the sidewalk graffiti that started it all…

Well, no, actually, a lady tripping over Rashad at the store, making him drop a bag of chips, was what started it all. Because it didn’t matter what Rashad said next—that it was an accident, that he wasn’t stealing—the cop just kept pounding him. Over and over, pummeling him into the pavement. So then Rashad, an ROTC kid with mad art skills, was absent again…and again…stuck in a hospital room. Why? Because it looked like he was stealing. And he was a black kid in baggy clothes. So he must have been stealing.

And that’s how it started.

And that’s what Quinn, a white kid, saw. He saw his best friend’s older brother beating the daylights out of a classmate. At first Quinn doesn’t tell a soul…He’s not even sure he understands it. And does it matter? The whole thing was caught on camera, anyway. But when the school—and nation—start to divide on what happens, blame spreads like wildfire fed by ugly words like “racism” and “police brutality.” Quinn realizes he’s got to understand it, because, bystander or not, he’s a part of history. He just has to figure out what side of history that will be.

Rashad and Quinn—one black, one white, both American—face the unspeakable truth that racism and prejudice didn’t die after the civil rights movement. There’s a future at stake, a future where no one else will have to be absent because of police brutality. They just have to risk everything to change the world.

Cuz that’s how it can end.

All-American Boys is quite of a throwback read – but then again, isn’t that my brand? -, but it’s still so worth picking up. Covering similar themes as books like The Hate U Give and Dear Martin, All-American Boys is a powerful talk on racism, white privilege and speaking up.

This is told in dual perspectives – Rashad and Quinn -, written respectively by Jason Reynolds and Brendan Kiely. The book reads like one, though, and the perspectives, albeit different, weren’t conflicting to the point it felt like two different books in one.

By the way, I warn you: this is going to be a looooooong review. I apologize in advance, but this read made me think about way too many things.

Overall, this book was an amazing and powerful experience. With books like The Hate U Give and Dear Martin getting so much praise, I really recommend you also pick up All American Boys. It may be a backlist title, but it’s just as impactful as the more recent ones.

Books like this one remind me why I adore reading so much. I do love some funny and entertaining reads, but the hard-hitting stories are the ones I feel like inspire change. I think it’s phenomenal when a book gets so many thoughts in my mind, makes me reflect on storylines so different from mine and, mainly, inspires me to always stand up for what I believe is right.

So, after the LONGEST review of my life: let me hear your thoughts! Have you ever read All-American Boys? If so, how did you like it? Let’s chat in the comments!