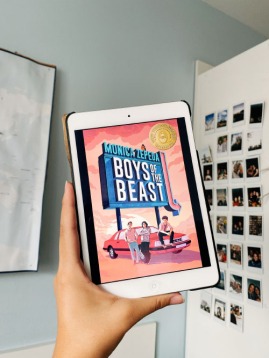 THE BOYS.Three strangers who also happen to be cousins:

Matt.Evangelical Christian. Earnest. Film nerd. Carrying a dream to make movies–despite the future his father has planned for him.

Ethan.Jewish. Gay. Sci-fi nerd. Carrying a phone that contains his entire relationship with Levi–unless they finally get to meet IRL on this trip.

Oscar.Stoner. Smartass. Too cool to be a nerd. Carrying a letter that haunts him–no matter how hard he tries to escape it.

This powerful voyage in three voices marks the brilliant debut of Monica Zepeda.

It’s been a long time since I last reviewed a book in this blog, but I really wanted to write a full review for Boys of the Beast. I got an unsolicited ARC of this one and it was the first time I had heard of it, but I am so thankful I learned about it! It’s a road trip book about family bonding between these three cousins after the death of their abuela.

I definitely enjoyed it a lot, and completely inhale read it, lol. In two days, I had finished the book and it was a great ride from start to finish. 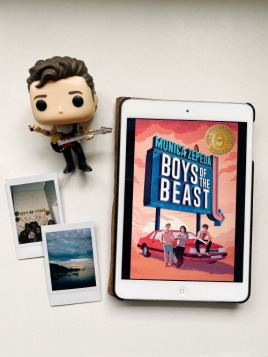 Overall, I did enjoy this one a lot, even if the writing wasn’t perfect. I am not sure if this is Monica Zepeda’s debut, but the problems I found with the writing weren’t major in any way. I think there’s a lot of potential in this author’s writing, for sure!

I also really appreciated seeing family dynamics at the forefront of a YA novel, that is typically populated by love or friendship stories. This is definitely something I want to see more often!

Are you interested in reading Boys of the Beast? Whar are some of your favorite YA contemporaries featuring male protagonists? Let me know in the comments!