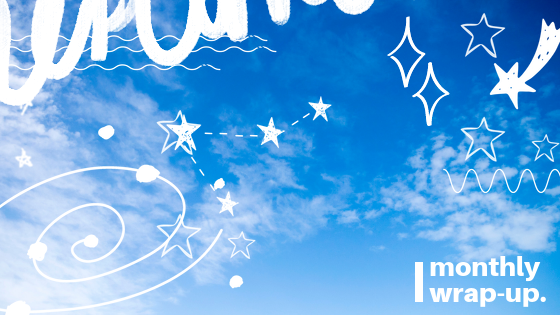 October lasted for forever, I feel like. And I also can not believe is already November. As the end of the semester approaches, I anticipate I won’t be able to blog much this month, but I’ll work my hardest to be on top of everything.

I was supposed to read this around my birthday on October 5th, because the title was just super fitting, but I accidentally devoured this in a day. This was possibly one of the best reading experiences I’ve had this year and I can not wait to buy a physical copy so that I can re-read it forever. I loved absolutely everything about it. Starting with the characters, Morgan and Eric are both so lovely and go through so much. Morgan is obviously struggling with her gender and sexuality and Eric with his family and abusive father. The friendship they have, though, is so pure and amazing and felt like a true breath of fresh air amongst the hardships they were facing. The way the book is written also allows you to watch them grow up and become their own people and change and evolve in some of the most beautiful but heartbreaking ways I’ve ever read about. I just want everyone to read this. The audiobook was great and features an interview with the author at the end that made me think a lot. I specifically loved how they mentioned how problematic it can be to carry on “cancel culture” we see online to our day to day life and how it is worth fighting for a better life amongst our communities. What I’m trying to say is: please read this. Thank you.

This was probably my most anticipated release of 2019 and I’m so disappointed I can barely talk about it. I finished this before Rainbow Rowell released there’s a next book coming out, but I still feel this one lacks a lot. Maybe, reading the whole trilogy, I’ll feel better about this and I’ll definitely consider re-reading it upon the release of the third one, but honestly, it’s like Baz and Simon didn’t have one conversation for more than two lines that wasn’t interrupted. They didn’t work any of the issues they had at the beginning of the book and it feels like a potential development wasted. The representation of the vampires made me annoyed AF too. I feel like nothing much about the magic system in this book makes a whole lot of sense and could’ve been build up better. I also wanted more closure for Simon as a character, and I expected that as soon as they said they would be going to America, but literally nothing happened. Basically: this book could’ve been everything but nothing happened, and I’m mad.

I listened to the audiobook for Emergency Contact, which, by the way, I really do not recommend. The narrator for Sam was really bad and spoke with this monotone, low voice tone that made almost impossible for me to hear him, even with earphones on. It also didn’t help that I couldn’t be less interested in the actual content of the book. Although I appreciated how it discussed mental health, with really important descriptions of anxiety and panic attacks, as well as how it gave us insight on the artistic process both of the characters (Penny as a writer and Sam as a film-maker) are going through, I really disliked this book. There’s so much girl hate. Just so much. It’s 2019, for God’s sake. I am also really done with YA characters complaining about the great parents they have, or acting like special snowflakes because they are sooooo different and awkward. Surprisingly, I actually appreciated the writing style and it gave me almost Rainbow Rowell vibes sometimes, but I still feel like we couldn’t have chosen more unlikeable protagonists to follow, as both are judgemental and annoying AF.

Apart from Wayward Son, Jackpot was my second most anticipated release of the year, and at least this one really did meet all of my expectations. I absolutely adore Nic Stone as an author and her writing style is so captivating. This book was a lot of fun, despise discussing such hard themes. That’s probably what I adore so much about her books: the fact that she can write these really witty and funny dialogues and amazing, three-dimensional characters, but also address themes such as racism, poverty and privilege really well. Zan was such a great character and so was Rico. The family dynamics here were also so pure and made me feel everything. Basically: Nic Stone is a queen and I think you all need to read all of her books.

My re-read for the month was The Dream Thieves, by Maggie Stiefvater. This is my favorite installment in The Raven Cycle series and I obviously wanted to prioritize a book I love for my birthday month. I decided to listen to the audiobook, since I’m already so familiarized with the story, but I really hated it. The narrator did such a weird voice for Kavinsky and he sounded more like a funny Disney sidekick than an actual villain. He also kept pronouncing ‘Niall’ Lynch as ‘Neil’ Lynch and that triggered me a lot. I still enjoyed the book enough, though I didn’t love it like I thought I would. I guess I’m really just realizing now the amount of problems in The Raven Cycle series I hadn’t noticed before. Like, the insta-love or Blue never being able to truly stand up for herself. How Gansey treats Ronan like a child he has to discipline instead of an actual friend. The fact the word ‘gay’ only showed up with a negative connotation, like when Kavinsky was trying to offend someone. I still really adore the characters and reading about Joseph Kavinsky always makes me weirdly happy, but this was probably my one disappointing re-read of the year.

As a birthday present, I got a copy of Patti Smith’s Just Kids. If I’m being honest, I didn’t know anything about Patti Smith before reading this book, but I thought it would be a good way to learn more. I’m really interested in the period between the 60s and the 70s and this book was a true immersion. Patti Smith lived more in twenty years than probably many people lived in their lifetimes. From living in the streets of New York with nothing but a passion towards reading to a groundbreaking punk artist, the book digs deep in her early 20s and the hardships she had to go through and also her relationship with Robert Mapplethorpe. I didn’t know much about him either, but their relationship was so interesting to read about. They were both really unique individuals, that found each other no matter the circumstances and I loved the photos we got to see in the book as well. I think this is just one of those books that throws you into rabbit holes of wanting to learn more about not only them, but also the people they interacted with, idolized, and both. However, I’d have enjoyed this a lot more if it had focused more on Patti than on Robert, because I truly just did not care that much about him as an artist or as a person.

As October is my birthday month, I really wanted to include a lot of songs I love, even though some are oldies here There’s definitely a ton of K-POP, but most importantly, musicals too! I went back to listen again to the soundtrack of Dear Evan Hansen and I’m so glad I did.

I want to listen to a lot more musicals, so you can definitely expect some on my November playlist!

If I’m being honest, I’m not looking forward to November at all. It will be a packed month and I have so much going on at college. I apologize in advance for my lack of blog hopping and posting, but it’s the end of the semester and I have several projects and things to work on. I’m exhausted just thinking about it.

Let me know what you guys are excited about in the month of November and what did you do this October!